“Are you sure that was your first time?”

They were sprawled across the bed, Kieran lying half on top of Lorde, one arm flung across her body and his face pressed against her right breast. He grinned and placed an open-mouthed kiss on her warm skin. She tasted salty and sweet, like chocolate covered strawberries.

“I am pretty good aren’t I?” He chuckled. “Want to try for a world record, Sweetheart?”

She tensed underneath him and didn’t respond. Finally opening his eyes, he glanced up to see her own eyes were closed and her lips had tightened. He rolled off her and sat up. Oh God, had he done something wrong?

“Are – are you okay? Did I hurt you?” He tried to keep the panic from his voice. He hadn’t even thought – was he supposed to do something after having sex? She didn’t seem hurt, surely he would have felt her pain if she was. Then he remembered he couldn’t feel anything from her. But she didn’t look distressed. Maybe… He didn’t know what to think.

She opened her eyes and turned to face him, calm but serious. “Don’t call me that.”

Confused, he frowned. “What?”

“Don’t call me sweetheart. I hate that.”

Was she upset with him? “Okay…”

Her eyes swept down his body and he suddenly realized he was very naked. His hand twitched, wanting to grab a pillow to cover himself. Which was absurd. He wasn’t ashamed of his body, he knew he looked good. He had great genetics and he worked out. He also knew that she’d enjoyed the sex. So what.the.fuck?

“Oh.” Of course. The relief that rushed through him was almost palpable.“I’m sorry, I didn’t think. But you’re okay, though? You aren’t hurt?”

He wanted to touch her, he wanted to have sex again or maybe just be with her like he was a few minutes ago, wrapped around her body, but she’d closed up and he didn’t feel welcome anymore. She was naked on a bed with him after having amazing sex with him but she was a million miles away.

Kieran spent years reading people, noticing body language, tone of voice, things they meant regardless of what was being said. So even though he couldn’t feel anything, he could tell she wanted to be alone.

“I have to be home soon. Could I use your bathroom?” He kept his voice neutral, his gaze on her face. He could be emotionless too.

She frowned a little, her eyes tracking his, trying to read him. “Maybe not,” she said softly. She looked towards the door across from the bed. “Bathroom is through those doors.”

As he rose, she called out to him. “Kieran?”

“Thank you for tonight.” She glanced out her window. “Or morning. It really was amazing. You’re really, uh, amazing.” She sat up and smiled a little. “I’m happy you shared this with me.”

And just like that, she’d thawed. Kieran was grateful; it meant he hadn’t done something wrong. He didn’t have much experience with the whole dating thing and he liked her. A lot. He really wanted this to work out. “Thank you for being…patient?”

She laughed and got off the bed to walk over to him. “Did you still want to try for that world record, Kieran?”

He’d heard his name hundreds of thousands of times before but when she said it in that tone… His response was immediately and unequivocal. “Shower?” 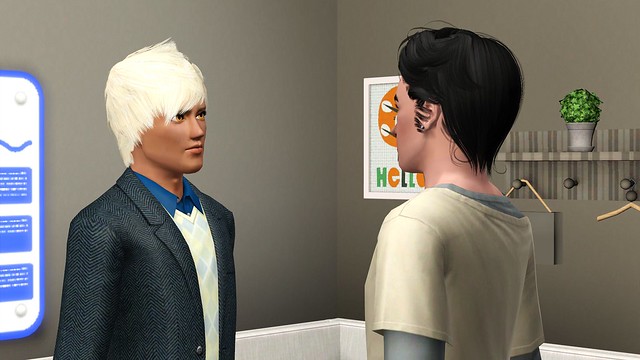 END_OF_DOCUMENT_TOKEN_TO_BE_REPLACED

Warning: Rated PG 13 for a semi-graphic picture. Nothing shows, but you get the point…