Aaliyah was happy. The happiest she had been in a long time. She had a husband who loved her and a baby growing inside her. Antonio and she had not decided where they were going to live yet, but they spent most of their time at her place. It felt great opening her closet and seeing Antonio’s clothes mixed in with hers.

It was on one of those days, while she was nuzzling the dinner jacket he wore the night before that she felt it. The baby kicked for the first time. Aaliyah made a very unladylike noise and then became very still. The little kick happened again and with wide eyes Aaliyah ran out of the room and down the stairs, screaming for Antonio.

“Antonio, where are you? Babe, it’s the baby!” Aaliyah reached the foyer and practically tripped over Darling. “Darling, the baby! It’s the baby! Would you like to feel -” Aaliyah paused for a second, “I must be going insane. I almost asked the dog to feel my tummy.”

“Oh baby, it’s the baby. The baby…I felt…oh Antonio, the baby!” Aaliyah knew she wasn’t making any sense and she could see the panic start to build in his eyes, so she grabbed his hand and put it on her stomach. “Feel.”

Antonio frowned, “I don’t under- Oh. My. God.” Antonio’s face went slack and his eyes got huge. He took his hands away and pressed his face to her belly.

Looking down at her husband’s bent head, Aaliyah again realized just how lucky she was. To think she almost gave up all of this. She almost lost her chance to share these moments with a man who was devoted to her and their child.

“Yeah, I know, right?” Aaliyah could feel her face stretching, she was grinning so hard.

Antonio straightened up and pulled Aaliyah into a hug. “That was incredible and just in time too. Our sonogram appointment is today. We get to see if it’s a boy or girl.”

“Oh, Antonio, I want to be surprised! I don’t want to know.” She smiled up at him, pulling Antonio into a tighter hug. “But, I have a feeling it’s a girl.”

“Oh, yeah? Are you psychic now?” Antonio grinned down at Aaliyah, kissing her nose.

“Didn’t you know? Haven’t you ever been to the basement? I have all kinds of goodies down there,” Aaliyah deadpanned. She gave him a very innocent, very sweet smile.

Laughing, Antonio set Aaliyah away from him and turned her around. “Go. Change. I’ll feed and water Darling, and take her for a walk. That should be enough time for you to get ready.”

“She’s not a plant for you to water and I do not take that long to get ready, thank you very much.” Aaliyah continued to grumble, but let Antonio lead her to the steps. “I love you.” She told him before heading upstairs.

In the first few months, Aaliyah continued to work. She was able to hide the small bump with loose clothing, but once she hit her third trimester, she had to stop accepting movie roles. Now she spent most of her days eating and dancing.And visiting her family and friends.

She also spent a lot of time down at the beach club, playing darts with Jay, Ariel and Ashley. But on the evenings, she would sit in her garden with Darling curled up on her lap and watch Antonio talk to the trees.

The nine months flew by. One evening, Aaliyah was explaining to Antonio the difference between television actors and film actors and all of the weird cravings she’d had that day.

“Do you know what I’m craving right now? Some waffles and tacos.” Aaliyah rubbed Darling’s stomach. Suddenly she felt sharp pain in her abdomen. She reflexively squeezed Darling who jumped off her lap with an indignant yelp.

“Babe, can you do me a favor?” Aaliyah said to Antonio, standing up and curling her fingers around her stomach.

“Can you get the overnight hospital bag?”

“Calm down Antonio. Just get the bag and meet me outside.”

“Yeah, ok. I’m calm. Wait, outside? Don’t leave this house without me Lia!”

Aaliyah rolled her eyes and walked toward the door.

“What are we going to call her,” Antonio asked softly.

“I’m thinking Rae Rose,” Aaliyah stroked the newborn’s soft baby hair. She was exhausted, but nothing could beat the joy of holding her daughter in her arms.

“After my mom? I would love that,” Antonio kissed her and held out his arms for the baby. “Now you need to rest.”

Aaliyah nodded and handed over the infant. “I’ll just close my eyes for a second.” She fell asleep before her head hit the pillow.

Two days later, Aaliyah was discharged with baby Rae and got to bring her home. She was relieved to go home but also dreaded it. Antonio, as amazing as he was, could get on her last nerve. “I’m surprised he let me walk out of the hospital on my own.” Aaliyah muttered to herself as she walked onto the sidewalk. As if he heard her, Antonio pulled up to the curb and honked the car horn at her.

Smiling, Aaliyah looked down at the baby and brushed her hand. “He means well, I guess. But daddy sure is strung out, huh?”

Rae waved her tiny fist around. Aaliyah sighed and walked towards the car. 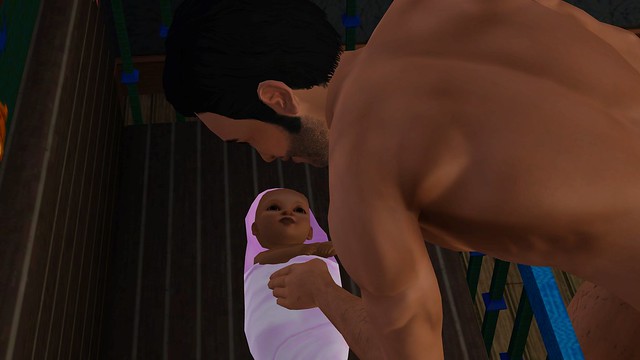 One thing Aaliyah had to give her high-strung husband credit for was his ability to wake up at the drop of a hat whenever Rae got fussy at night. He loved holding her and never let an opportunity to do so pass him by, which was just fine with Aaliyah.

They gradually fell into a pattern with the new baby. Aaliyah decided to take full maternity leave and stay at home and Antonio went back to work part time. He joked that owning his own business should have some perks.

“I want a new family picture.” Aaliyah walked into the bedroom, with Rae in her arms. “I want to capture this moment forever.”

Antonio looked up from his laptop. “Yeah, sure. We can ask Ashley to set up an appointment with Solange Gupta.”

Antonio grinned up at her, “I dated her for a year.”

“Relax Lia, we were thirteen, trust me when I tell you there was no loving going on. She’s an old family friend.” Antonio pushed back from his desk and standing up, reached out to kiss Aaliyah. “I do, however, think it’s sweet that you’re jealous.”

“I am not jealous!” Aaliyah playfully pushed Antonio away, laughing. “I was just making a statement.”

Solange came by a week later and took a family picture. It was very hard to get everyone focused and then Rae started to get fussy. In Aaliyah’s opinion, there was too much belly rubbing but she had promised herself she would not complain nor give Antonio any reason to tease her in front of Ms. Gupta. In the end, they chose the best picture and went with it.

Everything was great a Casa Torres and soon, Rae was having her first birthday. Aaliyah and Antonio decided to keep it very low key and invited only family and close friends. Aaliyah was very excited to see her family. They were flying into Appaloosa just for this occasion. However, her youngest brother, Aaron was the only one who was able to make it. Her family had to attend the launch of Sunset Valley’s first rocket launch.

“Lia, tell everyone that the food is ready while I run up and change Rae. Hey Aaron,” Antonio added as he headed up to the nursery with Rae in his hands.

Aaliyah turned towards her youngest brother. “It’s so good to see you. It feels like forever since you visited.”

“Yeah, sorry I’ve been so M.I.A. Everyone feels terrible for not being able to make it to Rae’s first birthday party.” 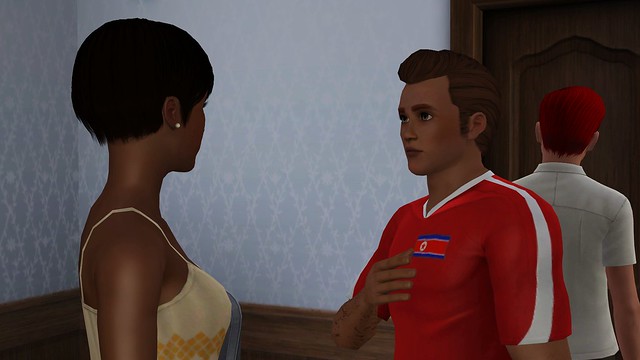 “It’s ok. I think Antonio is more upset he can’t talk sports with Bem than I am that I won’t see them all. I’m just glad you managed to worm your way out of it and made it here. How did you get dad to agree to you skipping the Sunset Valley launch?”

“I’m the younger son. I’m not obligated to go and he felt bad about missing the party. I used his guilt.” Aaron laughed, “Poor dad. He asked me to apologize to you about a dozen times before mom told him to cut it out.”

Aaliyah laughed too. Her father was one of the sweetest people in the world and she knew he was feeling awful about not being there. “I’ll have to call him and let him know it’s okay. You shouldn’t tease dad so much.”

“Yes, yes it did.” Aaliyah hugged her brother and headed outside to the backyard to light the fire to the barbecue.

As Rae got older, Aaliyah spent time teaching her to walk and talk. It was a very erratic process as she was working again and spent long periods away from her. One day, while kneeling to pick up an unsteady Rae, Aaliyah heard Antonio calling for her from the living room. She snuggled the baby and made her way to him. Antonio was grinning and seemed overly excited.

“Lia, I was thinking that maybe it’s time for a change of scenery. How do you feel about France?”

“We have an old family estate in a small town south of Paris. You probably never heard of it. I guess it would be nice to go on vacation, since we didn’t really get to have a honeymoon, what with me looking like a beached whale after the wedding.” Aaliyah shrugged.

“Aaliyah, you did not look like a beached whale, more like an overfed dolphin.” Antonio ducked her slapping hand. “I’ve been working on getting this huge proposal to re-landscape an old estate in a town called Champs Les Sims.” Antonio stopped talking and gave Aaliyah a funny look. “What happened, why are you looking at me like that?”

“You can’t be serious. That’s where my family estate is. Champs Les Sims. Are you kidding me right now?”

Antonio laughed. “It’s really is a small world. So, how would you feel about moving to France for a couple of years?”

“France? All my friends are here and my career, Antonio, that’s asking a lot. I don’t know.”

“You travel around the world for months at a time for your work; switching homes shouldn’t be a big deal. But you don’t have to decide right this minute. Think about it and we can talk some more once I put Rosie down for her nap.” Antonio scooped the baby out of Aaliyah’s arms and headed up to the nursery.

When he came back down, Aaliyah was drinking tea and had made a decision. “Fine. We can go to France, but Antonio, it would have been nice to be involved in the beginning, rather than having to decide whether or not to follow you halfway across the world.”

“That wasn’t my intention at all. If you don’t want to go, I can work from here. I would never leave you behind. I love you.”

Aaliyah felt a little guilty. She frequently left Antonio with Rae for months at a time while she worked onsite for one film or another. Sighing a little, Aaliyah stood up and wrapped her arms around him. “I love you way more.”