The little boy clapped. That was his favorite song. His mama was laughing and clapping with him. “¿Quieres cantar la canción otra vez?”

“Si, mama. Sing it again.” The little boy smiled at his mama.

His papa turned around and smiled at him too. Then the little boy heard a loud crash and everything went dark.

There was so much smoke. And his arm hurt, a lot. He felt someone grab him and lift him up. He wanted his mama.

“Hey big boy, are you okay? Are you hurt?” He could not see her, but he felt much better when he heard his mama’s voice.

He shook his head and looked at his arm. It hurt so bad.

“Your arm? Hijo, does your arm hurt?”

Then there was an explosion.

Antonio woke up with a jerk. He lay in bed for a few minutes, letting his heart slow down and his breathing get back to normal before he sat up. He hadn’t had that dream in years. Placing an arm over his eyes, he tried to push the memories away. He had only been five years old when he lost his birth parents. There’d been a sudden meteor shower and his family’s car had been one of the first casualties. He’d been lucky and escaped with only a broken arm, but his father had died with the impact of the meteor and his mother died later at the hospital.

But she had saved him. She had managed to get them out of the car and to safety before the car exploded with his father’s body trapped inside. Aside from those few memories, everything else about that day and the following weeks were a blur to Antonio.

Since Antonio’s family was only visiting Appaloosa Plains, when his parents died he was placed in foster care. He had been too young to give the authorities any information that could help them find his family in Monte Vista. Luckily, the family that took him in eventually adopted him and he’d found a permanent home with people who were kind and loving.

When he turned ten, he started having that dream. He was in a car singing a children’s song in Spanish with his birth mother and then he was crying and in pain. After years of therapy, the dreams eventually stopped. He had thought he was over it.

Turning on the light, he looked at the digital clock on his bedside table; four o’clock in the morning. Sighing, he swung his feet over to the floor and stood up. He wasn’t going to be able to sleep and had to wake up in two hours anyway.

Fixing his bed and heading to the shower, he decided to go to his client’s house a little early and start on the landscaping job. After two weeks of meeting and drawing out the sketches for the new look of her backyard, he would need to hire more landscapers for what was turning out to be a massive project. Only obscenely wealthy people would consider a 12-acre landscape a “garden”. Shaking his head, he got ready for his day.

“This was the worst idea…” Antonio heard grumbling and a loud bang. Following the voice, he rounded a corner and opened a bathroom door to see Aaliyah frowning at a leaking sink. The manual she was trying to read slipped from the counter and slammed shut on the floor. At the same time, the sink exploded and water spewed all over her.

Startled, Aaliyah turned around, “Sweet Baby Jesus! How long have you been standing there?”

“Not long.” Antonio tried to keep the laughter at bay, but he could tell from her expression that he was doing a terrible job at it.

“Get that smirk off your face and hand me a towel please.” She frowned and put her palm out.

Handing her a red towel he found hanging on the wall, he walked into the room and picked up the wrench she let drop when the water hit her. “I know a thing or two about fixing leaky faucets. I could help if you want.” 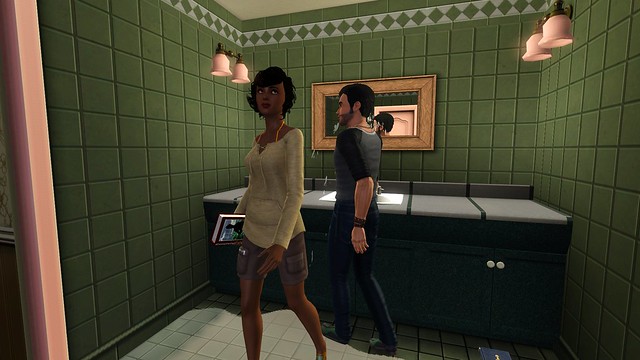 Giving him another look, she stepped aside and motioned toward the sink. “Go right ahead, that thing has leaked for weeks. How did you get in here anyway?

“I tried ringing the bell, but no one answered. Then I heard your dog barking and followed the noise to the back door. I heard banging and just followed that and the mumbling.”

Nodding, Aaliyah turned around and walked out, calling for her dog, “Darling, seriously, I thought we talked about this? No strange men allowed in the house!”

Shaking his head, Antonio started working on the sink. 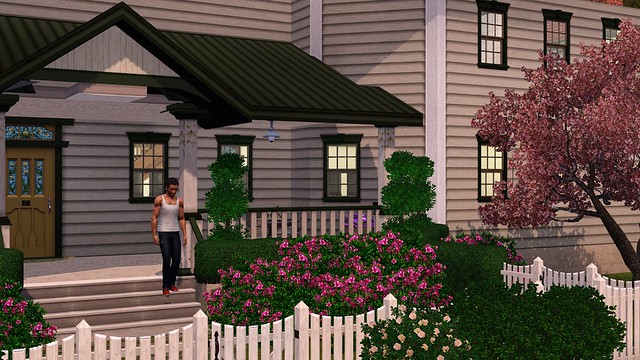 A few weeks later, Antonio was at his parents’ house, checking the mail and generally keeping the place from falling apart. He always meant to put it up for sale, but this was the last connection he had with Martin and Rose Torres. If he gave up the house, he would no longer have anything to remind him of where he came from and that was something he was not ready to do.

He heard barking coming from his front yard. Going out to investigate he found Darling digging in his small flower garden.

“Darling? What are you doing here girl?”

Darling glanced up at him and wagging her tail, barked her hello.

“Darling! You get out of that garden this minute. We do not tend other people’s flowers. Darling! Did you hear –” Aaliyah stopped short.

Antonio leaned against the door and smiled at her, “Hello there.”

He looked her over. Wearing a short jean skirt, a yellow shirt and cowboy boots, she looked casual and relaxed. She looked good, really good. “Your hair is different. I like it.”

She awarded him with a smile, which he returned easily. “Thank you, it’s for my new role.”

“No, let her dig, she’s not actually bothering the flowers and if she does I can fix it later.” He held the door open for her as she walked through.

As she passed by him, his eyes caught on the curve of her neck and the slope of her shoulders and he had the urge to follow that path with his fingers. She was so beautiful! Then she was through the door and the moment passed.

“Thanks. With all the work that’s getting done at home, she’s gotten a little restless,” Aaliyah explained.

“I’d be restless too if I was cooped up at home while someone else got to make a mess.” He led her into the living room.

Antonio chuckled, “This entire house could fit in the foyer of your castle, but thank you. I’m thinking about selling it though.”

He didn’t know why he said that, but in the last few weeks, he’d found himself drawn to her and telling her things that he would never feel comfortable saying to anyone else.

“Really? The entire lot? But it’s so beautiful and I saw a barn. Do you own horses?”

“We used to. But they were sold to a larger ranch a few years ago.”

She looked around again, “We?”

Raising an eyebrow, he said, “Yeah, my parents and I.” He could have sworn he heard a sigh of relief come from her.

“You must have some really great memories growing up here.”

“Yeah, it’s why I’ve kept it for so long. Since they passed away, it’s the last bit that I have of them. But everything comes to an end eventually and if some other family can move in and make memories in it, it would be worth selling.”

“I feel the same way about the castle. It’s very impractical of me to live in that monstrosity by myself, but my father loves it and he worked so hard to make it livable for us. I feel like I would be dishonoring him somehow if I moved somewhere else, as if saying his home isn’t good enough.”

“But he moved out. Are you sure he would care where you lived, so long as you were happy?”

“I know it’s irrational for me to think he would be upset and yes he did move out first,” she laughed, “but then I’d have to find a new home.”

“So really, you’re just scared of house hunting. Well, I know a great home that might be up for sale,” he teased her.

“I see. If you’re serious about selling, I might have to take this gem off your hands,” she said smiling.

“Yeah? Would I still have to come and tend your garden?”

Aaliyah laughed again, “Definitely. What would my garden do without you?”

He leaned in and whispered, “Let’s hope you never have to find out.”

They stared at each other for a minute and again Antonio wanted to touch her, create some contact between them to confirm that she was real and truly standing in his parents’ living room.

“It’s beautiful out; we could go to the pool this afternoon.” He made the suggestion and held his breath. He hoped he hadn’t read her wrong.

Aaliyah just stared at him. He never knew what was going on in her head when she did that. He thought she found him attractive and at the very least liked his company. But when she got quiet like this and just stared, he couldn’t figure her out.

He didn’t want to end this moment but knew he had to say something, because if he did not, he would kiss her. He would pull her in close and kiss her, something he’d wanted to do since the first day he met her. And if he started kissing her now, he wouldn’t stop. But there was too much they didn’t know about each other, too much he hadn’t admitted to, for that to happen.

This was the Aaliyah he knew. This he could handle. Brushing his thumb along her jaw – he really just had to touch her – he said, “Home with Darling, bathing suit and then the pool. Got it. Just let me grab my car keys.”